Menu
Log in
Register
You are using an out of date browser. It may not display this or other websites correctly.
You should upgrade or use an alternative browser.

Wow. Just saw the post about the deer. Actually, it doesn't look too bad. A buddy basically totaled his 92 hitting one.

broncojunkie said:
Wow. Just saw the post about the deer. Actually, it doesn't look too bad. A buddy basically totaled his 92 hitting one.
Click to expand...

Luckily it wasn't a large deer as I hit it at 60mph. But it did bend the upper radiator support and break the front bumper. The radiator may be leaking as well.
After I finish the heater core in the Durango I'll start pulling it apart to further assess the damage.

I have been wanting a tubular front end from 417 Motorsports or Team Z. Now would be a great time for one if I had the money and time. But I'm just going to straighten things out the best I can for now. Our first points race is on the 23rd of March; so I'll need to get going on it.

Here's a little update on the deer incident. It did end up bending the front a bit more than it previously looked. So the core support has now been removed and another will be going on shortly. I hope I can have it done and back on the road in time for the local Easter race.

Good to see her getting fixed up!

Got the straight core support welded in.

Sprayed a little paint to keep the welds from rusting and bolted the bumper back on.

And finally hung the fenders, installed the new clear headlights into another bumper cover that we had laying around, and bolted it all on and aligned things up.

Everything actually aligned up better than before the deer. Now to get the radiator, electric fan and shroud, battery, and new hood latches installed. Then I can change the oil, spark plugs, and swap to the drag wheel and tire setup and I will be all good to go for the annual Easter Race at Roxboro Motorsports this weekend.

To the track all in 2 weeks!

Just wondering if you're getting any track time in this summer. Was hoping to see some good video lol

broncojunkie said:
Just wondering if you're getting any track time in this summer. Was hoping to see some good video lol
Click to expand...

Yes I have been at the track several times. We just ran the 4th bracket points race this past weekend. I'm currently in 6th in the points for the foot brake class.

Sorry for lack of video. There is no one there with me that would be able to take a video. Everyone else I'm there with is usually racing too.

Sorry for being MIA.

I've been quite busy with working extra days at my 2nd job and helping the GF get her farmers market business going. I hadn't had much time to work on the Mustang.

I did get the front brake rotors for the 5-lug swap. So maybe I can start on that soon.
Baer 2 piece 13" rotors.

I had also been having a problem with the car stumbling/backfiring and then eventually shutting down.
So I decided to go ahead and do the 3G 130amp alternator install since I already had it.

I managed to get enough time to pull the old alternator and bracket off. Then I clearanced the bracket for the 3g alternator, and shot it with some paint.

Installed and wired the alternator up as well as cleaned up some of the wiring from the solenoid to the headlights and alternator.

That still didn't take care of the problem with the stumble and dieing. But it did mark off one of the items on the to do list. And I don't have to worry about low voltage when the electric fan is running.

I was able to manage to pull some codes and it came back as a PIP code. So ordered and installed a new distributor.

Since the current race and show season has been delayed, I decided to pull the upper intake and install the BBK fuel rails, Russell fuel lines, 24# Ford Racing injectors, and the Aeromotive fuel regulator.

But upon priming the system, there was a bad fuel leak between the rail and the regulator adaptor block. I tried to fix the leak 3 separate times to no avail. The design only has an O-ring sandwiched between the non-machined rail and the block with just 2 small screws to distribute the clamping pressure. To me this is a terrible design and I was not going to trust it.


So I ordered a set of Trick Flow black anodized rails, lines, and AN fittings.

I might paint the upper intake while it's off and clean up under the hood some. Maybe reroute vacuum lines and remove the ones that aren't being used. And possibly reroute and tuck some of the passenger side wire harness.
Last edited: Apr 15, 2020

Over the weekend I finally found enough time to finish up plumbing the fuel lines.
I'm not completely happy with the routing. But it should do for now.

Also while the intake was off, I took a little time to spray paint it.

Before I bolt the upper back on; I'm tempted to also spray the valve covers and maybe a little bit of the shock towers and firewall.

I wasn't able to get much done to it over the weekend. But I did pull and paint the valve covers to match the intake.

Now I'm waiting on a few small items that I've ordered. New Valve cover gaskets and bolts, a few clamps and separators for the fuel lines, and a new oil fill cap.

I also ordered some Black Oxide Concentrate to try making a few of the bolts and various items blackened.

Once I get the topside buttoned up, I plan to turn my attention to the exhaust and take care of the exhaust leak. I'm very tempted to pull the entire system including headers to clean and refinish.

Over this past weekend I was able to dedicate quite a bit more time on the coupe.

First up was to replace the PCV screen, grommet, and valve. It was a good thing I did this as the screen was completely clogged.
Next I organized and secured the fuel lines with some separators and hose clamps. This was then followed up by bolting the valve covers back on with new steel core gaskets and new black anodized 12pt bolts.
Then finally a 1/2" intake spacer with new gaskets and the intake was bolted on and vacuum lines routed.

The intake plaque was painted before going back on also. And I topped it off with a new oil fill cap.

After all this was done, my attention was turned to the exhaust. In an attempt to take care of the exhaust leak once and for all, I pulled the entire exhaust including the longtube headers. This was so much easier with the tubular K-member over the factory K.
I will clean these up and spray a couple coats of high temp silver paint before going back in with new gaskets and bolts.

While under the car, I'll go ahead to change the oil and inspect the suspension. Then back to the topside for new plugs, ignition wires, and distributor cap, and installation of the Pro M mass air meter.

Took care of the headers and mid pipe over the weekend. I started by taking a wire wheel to knock the rust and dirt off. At this time I also ground out the excess weld on the inside of the tubes at the header flange and cleaned any remaining gasket material from the flange.
Then I cleaned the dirt and dust off and sprayed them with a couple coats of VHT Silver Ceramic header paint.

All sprayed and looking much better!

And finally time to re-install the headers with new gaskets and ARP header bolts.

Next up will be to change the oil, re-route the O2 sensor harness. Then I'll turn my attention back to the top side for fresh plugs, ignition wires, and distributor cap. Then I make sure everything is plugged, connected, tightened, and install the new Pro-M 80mm mass air meter. All this so I can start her up, set the fuel pressure, set the timing, and do a base idle reset.

Then I'll finish installing the rest of the exhaust including the new Spintech Pro Street 9000 dumped cat-back.

Over the weekend I found a little time to get several small things checked off.

First I did a little preparation by using some Black Oxide solution to blacken a few of the bolts that I'd be using.

Also my dumped Spintech Pro Street 9000 cat-back came in. The mufflers are half the size of the MAC's that I just pulled off. So there is a little more weight savings.

Finally got everything buttoned up and mostly dialed in.

Feels good to finally be able to drive it again! 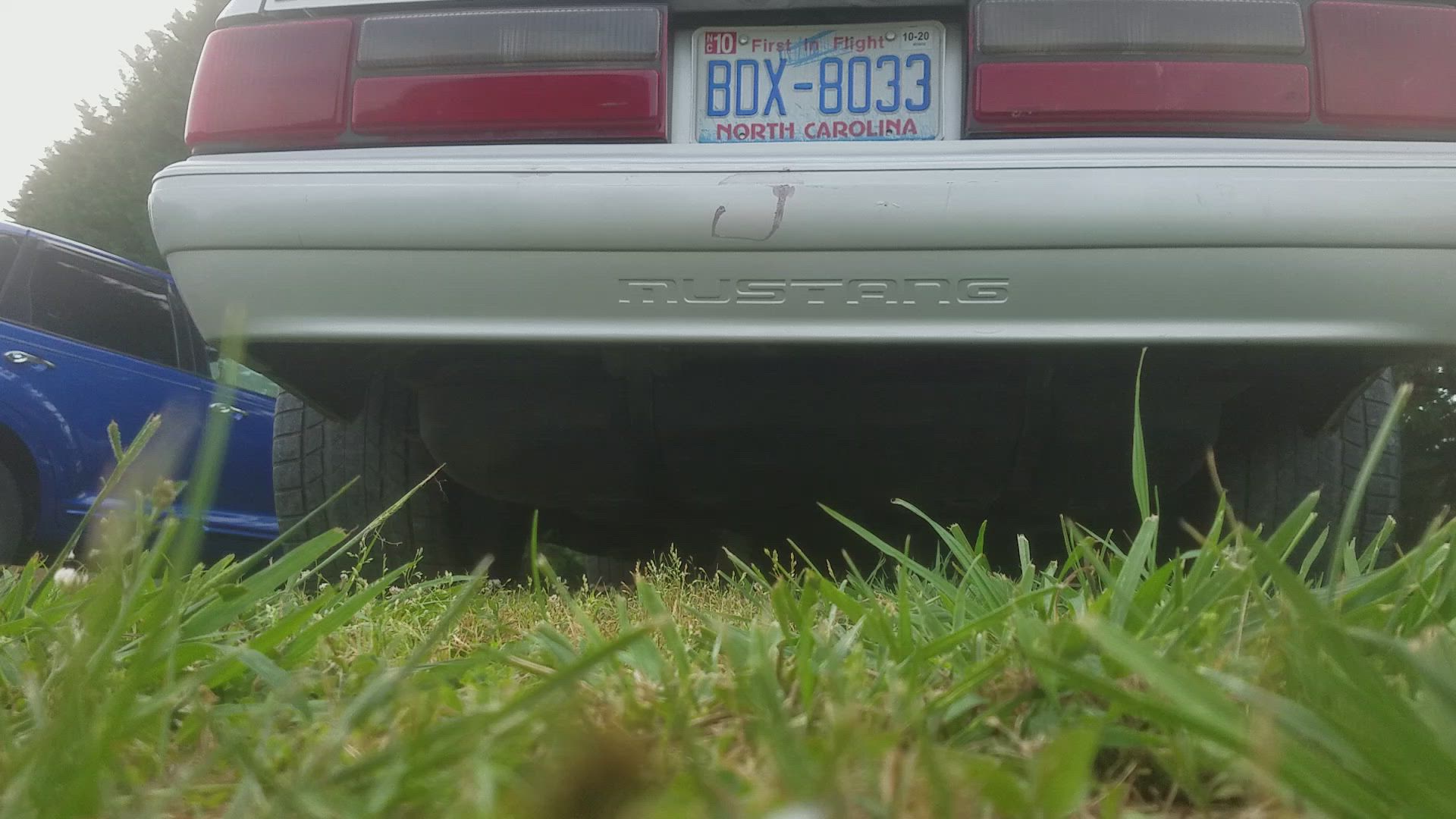 Now a little fine adjustments and I should be ready for the track this coming weekend.
T

Just a small little update.
Hadn't done much to the coupe since the last post other than driving and racing.

I did replace the passenger exterior door handle and the driver side door latch. While I had the door panels off, I took the opportunity to replace the inner window dew wipes and the map pocket delete panel.

Then I cleaned it up inside and out in preparation for "Not" Mustang Week 2020.

It turned out to be a GREAT event! It was just as packed with Mustangs as if everything was normal.

Just a small little update.
Hadn't done much to the coupe since the last post other than driving and racing.

I did replace the passenger exterior door handle and the driver side door latch. While I had the door panels off, I took the opportunity to replace the inner window dew wipes and the map pocket delete panel.

Then I cleaned it up inside and out in preparation for "Not" Mustang Week 2020.

It turned out to be a GREAT event! It was just as packed with Mustangs as if everything was normal.

This past weekend we had almost perfect weather for late November in the low to mid 70*'s and low humidity. Not knowing if such a day would come again anytime soon, I took the opportunity to paint the brake calipers for the 5 lug Cobra disc swap.
They were painted Ford Green Gem Metallic using 2K epoxy primer, 2K basecoat, and 2K Gloss Clear in spray cans. This is the same color that I plan to repaint the '93 with.