I'm aware of Saleens. By some luck I learned about the SAAC Mustangs. I have heard on some other posts there were Fitapaldi, BBK, Steeda and other tuner or Special Build cars. Can you guys help me learn more about these?

I would love pics to be included, even if it is a cell pic of an old magazine. If you don't have them, don't let that stop you from posting.

Are you just talking about Fox Body's or all Mustangs?
My life's goal is to own an ASC Mclaren Mustang or Capri one of these day's!!!

I'm talking fox only, kinda hidden up there in the title but I should have mentioned it in the post.

Yes, I'm familiar with the McLaren and all those listed with sections on the forum. I remember back in 1992 there was a fellow who had one of these for a summer. I think he said it was his uncles and it was for sale back then. The only thing I recall being a bit unique ws that it had a large orange Mercury or McLaren sticker in the middle of the large back window. 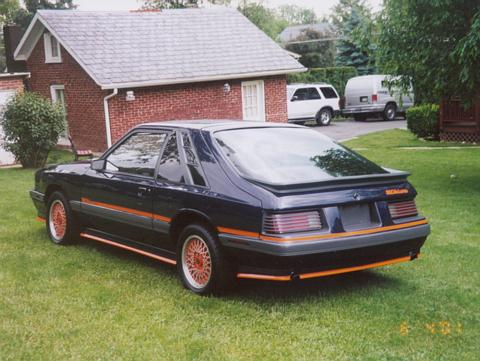 Here are a few leads I found just by searching ebay. I've not read these, just saw the covers. Doesn't seem to have much on the net. Do any of you guys recall these or have some of these old rags?

Staff member
Didn't Halcomb or Dungan racing have one too? Can't remember?

Kenny Brown Outlaw was another, yes Dugan made at least one.

Thanks! It sure would be nice to get some detailed tech discussions on each car. Do you think that is beyond this forum?

Help me understand the Dugan cars. They were cars modified and sold new via a Dealer? Which ones etc...?

PxTx said:
Help me understand the Dugan cars. They were cars modified and sold new via a Dealer? Which ones etc...?
Click to expand...

I think you could buy them from directly his shop...

Yes, Dugan Racing was based in Georgia. Mostly they were an aftermarket parts supplier but the owner Tom Dugan had a few nicely modded foxes. Their catalog was called the 5.0 Bible and the shop was known as "The Best Little H.O. House in Georgia." One of Dugans own parts was the Dugan Whale tale, it was similar in design to the Saleen wing but with softer lines as can be seen in the pics above. I may still have one of the catalogs from like 97.

Staff member
found this book that covers the entire history of the fox, including every special model.

The thing is, we're still kind of learning about everything that was going on back then. I started turning wrenches on 5.0's clear back in 1988, before I had a driver's license, and I'm still learning new stuff all the time. Here's a rundown of a few I'm aware of:

Crawford Quarterhorse: This was a package car built by Ronnie Crawford down in Florida. The base package was an LX notch, although you could change to a another bodystyle if you wanted ( a supposed 93 Cobra Quarterhorse was for sale on Corral a few years back). The package consisted of some suspension mods, big n' little Draglites or Dragstars, upgraded driveline with your choice of gearsets, and the heart of the package, a 347 stroker with TFS Street Heat heads and a tubular GT40 intake. Crawford guaranteed at least 12.50's in the quarter which doesn't sound like much until you consider that this package was N/A, pump gas, 50-state legal and even came with a 12-month, 12,000 mile warranty. A cam change and a ragged edge tune and you were knocking on the 10-second door, as Ronnie's personal notchback at the time demonstrated.

Summit Ford Dominator: Built by Summit Ford in Kansas City, these were produced for almost 10 years, starting in 1982. Possibly the first "tuner' 5.0, the later cars were little more than stickers and maybe a set of short-tube headers. The early cars, however, particularly those with the Stage 3 package, were a whole different animal. The engines were pulled and sent to a local race shop where they were rebuilt with 12.5:1 TRW slugs, a solid lifter cam, and the heads were ported and upgraded valvetrain installed. They reused the factory aluminum intake, but replaced the emissions Holley with a good old fashioned 750 mechanical secondary pumper. All the smog was round-filed, and long tube headers were installed, along with a water/alchohol injection kit and a special MSD ignition system with switch on the dash to flip between two different timing settings. Pretty big stuff in 1983, and I may be forgetting a few details; Steve at the Dominator registry would be a better source for info than I am. Stage 3's are exceedingly rare; I believe Steve has only managed to document two of them to date. And of course Summit built cars to customer spec, as well. There were cars equipped with the old ball-drive Paxton blowers, and even rumors of a couple of 460 swap cars getting out the door before the gubmint swooped in and shut 'em down.

Those are a couple of big one's off the top of my head. There are many more; I know John Bleakly Ford outside Atlanta built a few hot rod Foxes, and of course Tommie Vaughn Ford in Houston was well known for building GT40 "package" cars as soon as the GT40 stuff showed up in the catalog. I'll go into some of these others when I get a spare minute.

So I was unpacking some boxes from my recent move and came across this...

I got this back in 98 in a package deal that Dugan sold, it included the plate frame, a windshield banner, a t-shirt, a keyring & their catalog.

Thanks, I think I still have a windshield banner in yellow somewhere. They sent the wrong color on the original order and had to send another in white that I put on the rear window of my 85.